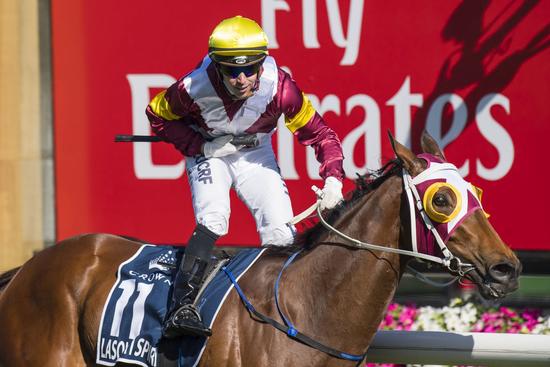 While he doesn’t expect Lasqueti Spirit to cause another big-race boilover, trainer Lee Curtis believes the star-studded Apollo Stakes is the right race to kick off her next campaign.

The filly was a 100-1 winner of the VRC Oaks in November, leading at her own pace and defying all attempts to run her down.

It is her pace, or perhaps the lack of it, that has persuaded her trainer the 1400 metres of Saturday’s weight-for-age Apollo featuring champion Winx is a better option than the Light Fingers (1200m) against her own age and sex.

“I think over the six furlongs those fillies would make her look silly,” Curtis said.

“She can’t sprint with them. She only has one pace and she just keeps going at that.

“She’s got no weight and I think she will derive more benefit from this race heading to the longer races and the Australian Oaks.

“I’ll be happy if she can finish midfield and that will give us an idea of where we are.”

The Apollo is dominated by the return of Winx who is at $1.15 with Hartnell, who finished eight lengths behind her in the Cox Plate, the only other runner given any chance at $9.50.

Lasqueti Spirit is again at $101 but is not the rank outsider with Sacred Master and Group One winning stayers Preferment and Magic Hurricane at $151.

Dibayani is on the third line of betting at $21 and his co-trainer David Hayes is hoping he can be in the finish having shown a liking for Randwick in the past.

“We were going to try to dodge Winx but unfortunately the program gave us no choice,” Hayes said.

“And he doesn’t like the Melbourne way of going. So we’re hoping we can run a place.”

“Two of his placings have been behind Winx, so there’s a lot of horses that can’t get near her.

“His Epsom run, he was beaten a head by Hauraki who is a pretty smart horse. So he’s got form behind Hauraki and Winx.

“I think you’re talking through your pocket if you pot him too much.”

As well as the Epsom, Dibayani’s Randwick performances include a second to Winx in last year’s Chipping Norton Stakes and second to Sense Of Occasion in the Villiers.