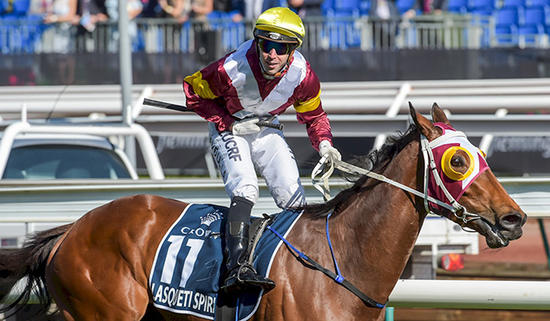 The VRC Oaks-winning pair of Lasqueti Spirit and Brenton Avdulla will combine again for the first time since that stunning result at Flemington, in The BMW (2400m) at Rosehill on Saturday.

The Lee Curtis-trained filly was handed a pretty tough step-up in class immediately in the autumn, taking on Winx first- and second-up - but that decision was vindicated when the daughter of Beneteau ran second to the champion in the Chipping Norton Stakes, beaten only two lengths with Jay Ford in the saddle.

Fourth-up into Saturday's Group 1 $1.5 million BMW, Curtis - who trains out of Rosehill - said the time was right to get Avdulla back on board as she steps out to the mile-and-a-half for the first time since the hoop created a famous moment with a bow aboard the filly when passing the finishing post at Headquarters.

"After she ran second to Winx, they [Avdulla's camp] rang up and said it might be time for us to get back on," Curtis told RSN 927's Racing Pulse on Tuesday.

Curtis said his gut feel is Lasqueti Spirit gets around Randwick better than home-track Rosehill, but regardless, he wanted a good hit-out in the BMW before his filly tries to do the Melbourne-Sydney Oaks double in the Australian Oaks on April 8.

"She's just so dour. It's less about the class [on Saturday], and more about the distance.

"We know she gets treated well at the weights [52kg].

"She's basically ineffective below a mile-and-a-half. I know she ran second to Winx on a Heavy track, but the bias of the day may have aided her a little bit. Below 2000m, 2400m, she's just ineffective.

"It's all about getting a good mile-and-a-half run into her before going to the Oaks. As we're treated well at the weights, we might be able to pick up some pointy end of the prizemoney."

Curtis said the sharp rise in rating - she went from being a 59-rater in the Oaks, to a 100-rater first-up in the Apollo Stakes - had been a challenge for him in placing her, but she had stepped up over the less-favourable shorter trips.

"Prior to winning the Oaks, she was running around in Class 1s and maidens," Curtis reflected.

"She's got to compete with the big guns now, she's going well and we're looking forward to getting to the mile-and-a-half and dropping back in the weights.

He added: "She's certainly got her limitations in terms of tactical speed and turn-of-foot, I can see that.

"As far as class-wise, you don't go around winning Oaks and running second to Winx unless you've got a fair bit of it.

"What she lacks in those two areas, she makes up in her dead-set toughness, and how dour she is, although she's not bred to be, she's so dour and tough. Amazing filly."

Curtis said the Oaks win, which put his stable name up in lights, had been of benefit to his business.

"It's definitely helped our stable a lot," Curtis understated, saying finding owners for horses had been more straightforward since the major win.

One of the horses that he won't even have to do that for is the three-quarter little brother to Lasqueti Spirit, picked up by the Oaks winner's owners Frank and Christine Cook at the Adelaide Magic Millions Sale last week for $50,000.

Lasqueti Spirit is $17 in CrownBet's all-in BMW market, while she is a $9 chance for the Oaks.