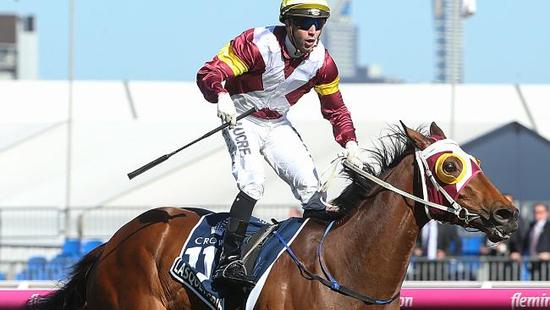 THE instruction was simple: “If you like the filly, buy her.’’ Trainer Lee Curtis was about to leave the Magic Millions Sales at the Gold Coast and return home to Sydney when owner Frank Cook called and asked him to check out Lot 892, a Beneteau filly out of Supriym Story.

Curtis was impressed by what he saw — a physically imposing filly with a relaxed attitude and sprinting genes coursing through her veins. He couldn’t leave the sales without her.

“We thought Frank might say don’t worry about it, you have paid too much for the filly. But Frank was happy and kept his half, and we leased some of her to clients.’’

The rest, as they say, is history. The filly was named Lasqueti Spirit, so-called after the fastest of the Beneteau yachts, and although she has managed only one win in 13 starts, that was in the Group 1 Victoria Oaks. Her racetrack earnings already exceed $750,000.

Trainer Lee Curtis and wife Cherie with Lasqueti Spirit. The filly will be chasing a slice of history in The BMW on Saturday. Picture: Brett Costello

Lasqueti Spirit chases her second major in the $1.5 million The BMW (2400m) at Rosehill Gardens on Saturday.

Curtis has found his next “good horse” — although the early signs were not encouraging.

Bred to be a speed machine, Lasqueti Spirit did not live up to her breeding. She was slow … very slow. Curtis despaired with the filly’s lack of speed and told the owners: “She’d better stay or we are in trouble!’’

But the trainer could sense the filly had strength and stamina reserves so he planned a Victoria Oaks campaign last spring even when she was getting beaten in maidens at the provincials.

Lasqueti Spirit finally got her chance at the classic distance in the Victoria Oaks and with Brenton Avdulla in the saddle, her dashing all-the-way win remains one of the highlights of the season.

Curtis is looking forward to getting Lasqueti Spirit back out to 2400m on Saturday, and is reuniting Avdulla with the filly for the first time this autumn.

“She wants to run over a distance so the plan has always been to go to The BMW,’’ Curtis said. “We get treated a bit better at the weights in this race so she can get out there, skip along and try to put them to the sword.’’

Curtis said Lasqueti Spirit has returned in good order including her second to the mighty mare Winx in the Group 1 Chipping Norton Stakes two starts back. The filly then ran seventh to Tavago in the Sky High Stakes but the effort still pleased her trainer.

“Her run behind Winx was really good and even last start, she kept chipping away to the line. That’s her, she tries very hard,’’ Curtis said. “She needs to get rolling along, into her rhythm, like she did in the Oaks. Now that we are up to 2400m we will try to do that in The BMW.

“We are taking on the older horses and it will be very tough to win but as long as she runs well, then we can go to Randwick for the (ATC Australian) Oaks with a bit of confidence.’’

No filly has won The BMW — in fact, none have managed to even place since Rose Of Kingston ran third to Prince Majestic in 1982. Rose Of Kingston then backed up to win the AJC (now ATC) Australian Derby to clinch Horse of the Year honours.

“Rose Of Kingston … she wasn’t a bad filly,’’ Curtis said when reminded of the record of three-year-old fillies in The BMW. “There are not many fillies that run in this race but it has always been part of our preparation for ‘Lasqueti’ heading towards the Oaks.’’

Lasqueti Spirit has helped business, too. Curtis revealed he spent $950,000 on yearlings at the Magic Millions earlier this year and has already syndicated $820,000 worth to clients.

“For our business, she has been good. It hasn’t been massive, the phone doesn’t go crazy and you still have to create your own business,’’ Curtis said. “You have to speculate in this game and it is easier to on the back of her.’’

Lasqueti Spirit is Curtis’s first Group 1 winner since he prepared Mistegic to win the 2002 The Galaxy. Perhaps it would be simpler to say the long wait has been worth it but between Group 1 winners Curtis has had to endure some lean years where there were periods of self-doubt.

“To have a Group 1 horse in the stable, it is fantastic, it changes your whole demeanour,’’ Curtis said. “The stable staff, the way people talk about the filly, someone is always mentioning her on social media, it gives everyone a boost

“So, to have a filly like Lasqueti Spirit in the stable just brings you on. We have a lot of young ones coming through — I’m keen to find the second-best horse in the stable.’’