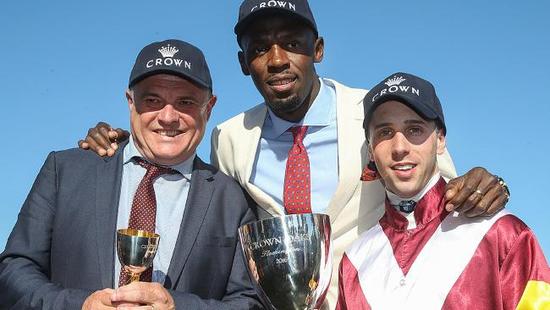 A few days before the Victoria Oaks, Lee Curtis sat in his Rosehill stables at a card table in near darkness. Wife Cherie was on the other side. They lit a candle and ordered Chinese takeaway, wondering what a fortune cookie would say at that exact moment given they were about to load a 100-1 bolter on to a truck headed for Melbourne for one of the most prestigious races in the land.

"We looked at [the setting] and said, 'This is a candlelight dinner in the middle of the stable'," Curtis laughs. "That was a good photo."

Perhaps not as good as the one of Brenton Avdulla bowing for his daring front-running ride on Lasqueti Spirit to win the Flemington classic, which had Szechuan chicken promptly being swapped for sweet champagne. The freeze frame now adorns the front of Curtis' stable.

So what's changed in six months? Lasqueti Spirit is back in the Australian Oaks – notably an $8 chance rather than the write-your-own-ticket quote of November – and one of the Sydney training ranks' good guys is standing on the brink of something not achieved since Serenade Rose did the big double in 2006.

"You have a lot more confidence in yourself and you don't doubt yourself as much and wonder, 'Can I do this?', even though you can't please everyone," Curtis says.

"Don't get me wrong, no one rings you up and says, 'Hi, I'm Joe Blogs with four Redoute's Choice horses'. You've got to create your own [market] for the most part, but people contact us all the time now with fillies [Lasqueti Spirit's majority owner] Frank [Cook] has bought that he's leasing, and colts we've bought.

But the more things have changed for Curtis, the more they've stayed the same. His family is still the heart and soul of the business. Cook and his wife Christine are still major backers of his stable. And one of Lasqueti Spirit's part-owners, banker Andrew Davison, is still as close as ever to the trainer after helping to rescue Curtis' failing venture almost a decade ago.

"There was a bit of business stuff [he needed help with] and a bit of lifestyle and emotional things," Davison shrugs. "We're about the same age and it was a possibility to help him out. It was nothing beyond what a normal person would do. I like to be closely involved with my horses and training, and we seem to get on well together."

But Curtis is much more forthcoming when it comes to Davison's role.

"I was in all sorts of trouble ... I was nearly getting kicked out of here and he saved me," Curtis says. "If it wasn't for him there's no way in the world I'd be here. I owe him heaps. He's been really good and continues to be. [But] he's a friend more than anything."

Curtis has had a few of them. Every one of them has backed him to the hilt. Want to challenge conventional thinking about tactics? They've done it. And continue to do so.

The trainer compares it to seeing how far you can walk out on a branch before it snaps. Magician or a mug. It's the fine line jockeys and trainers walk every day. But why isn't there more initiative and imagination shown these days?

"If it comes unstuck you look pretty stupid – especially when you're a small trainer, because you're perceived to be a bit of a goose to start with," Curtis says.

"It's very hard to be astute when you've got a small stable. If you've got a big stable, one goes down another jumps up. I'm not like that. You've got to think about these things. It's like walking out on a branch before it breaks, 'Oops, I went too far and bang'."

Yet Curtis, the suspended Avdulla's replacement Jay Ford and Lasqueti Spirit's band of owners will be tip-toeing out in front again in the $1 million Australian Oaks at Randwick on Saturday. A length here. A length there. Watch her slip four in front. Five. Six. Can she possibly hang on?

"I remember Gary Portelli said, 'that was Stylish Century and Vo Rogue rolled into one [in the Victoria Oaks]'," Curtis says. "It was exciting stuff.

"When I was a youngster they were the horses you loved. I've got one now, not in that class perhaps. But that style of horse is so exciting. At some point on Saturday we're going to be a good margin in front. And everyone's watching. It's great to be a part of.

"We are acutely aware of the enormity of [doing the Victoria-Australian Oaks double] and the challenge ahead. If we run first four you've probably got to say that's an outstanding effort. To win it would be just crazy stuff. Fantastic. And I think she can win it."