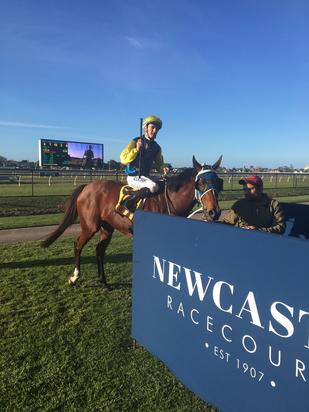 GROUP 1 winning trainer Lee Curtis was delighted with his improving mare Mon Bel Ami which broke through for the second victory of her career at Newcastle on Thursday.

Ridden by Josh Adams, Mon Bel Ami went back towards the tail of the field in the early stages before unleashing a powerful finishing burst in the home straight to score by 0.71 lengths over favourite Deadly Shadow, with Finnero rounding out the placings back in third.

By Casino Prince out of Heavenly Glow, Mon Bel Ami has now won two of her 26 starts with $65,000 in career earnings.

Despite not winning too often, Curtis said he had plenty of confidence in Mon Bel Ami heading into Thursday’s race.

“She has been in good form and although this track probably doesn’t suit her, she probably wants it a bit wetter, I thought I would bring her,” Curtis told Horse Betting at the track.

“She is a get back horse so I told Josh to hold her back and ride her quiet because I knew she had the paralysing finishing burst and that’s what she showed here today.”

Curtis said the four-year-old mare has always shown plenty of promise and is finally starring to find her best form on the race track, with three placings and a win from her four most recent starts.

“Some of them never come good and that’s the trouble, but we always had a lot of fair in her,” he said.

“She has been running into form and although she has always showed a lot of talent at home, she had been racing very inconsistently.

“But we showed some patience and kept her because we know the ability was there, now we are starting to reap the benefits of it.

“She has changed in herself – she is much more confident and although her work has always been good she has really taken it up a notch in the past three or four months.”

Curtis said there are no major plans for Mon Bel Ami, however the Rosehill conditioner noted a win in town is not beyond her.

“The most likely scenario is that we’ll head back for another provincial race, but if we get a wet track in town I think she will be very competitive.”

Meanwhile, Curtis reported that his stable star Lasqueti Spirit is back in work ahead of the upcoming Spring Carnival where he is hopeful the VRC Crown Oaks winner can add a few more feature wins to her resume.