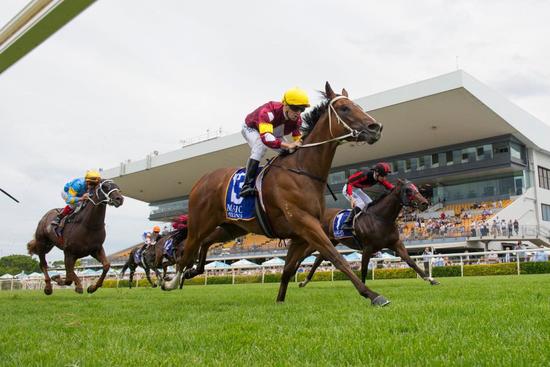 Sydney filly Meryl staked a claim for the $2 million Magic Millions Classic at the Gold Coast in two weeks with a commanding victory in the Group 3 B J McLachlan Stakes at Doomben on Saturday.

Heavily backed, Meryl, ridden by Christian Reith, looked to have plenty in reserve in her three-quarter length win over the fast finishing Queenslander, Hopes Eternal.

Witherspoon was third, a further neck away.

Rosehill trainer Lee Curtis mapped out a plan for the Magic Millions Classic back in September but it went astray when the filly failed to place in the Listed Gimcrack Stakes at Randwick.

Curtis sent the daughter of Epaulette for an immediate break and gave her two barrier trials ahead of her Brisbane debut.

“She wasn’t at her peak for the Gimcrack but she has thrived in the three days she’s been up here,” Curtis.

“It’s going to be a tough race but we’re having a go.”

Curtis praised Reith for a perfect ride on Meryl.

“Christian didn’t think there was a lot of pace in this race but I was happy when he said he’d take a sit behind the pace,” he said.

“There’s heaps of improvement from her and she’s just coming into her own."