Lee's hoping Meryl can win an award or two 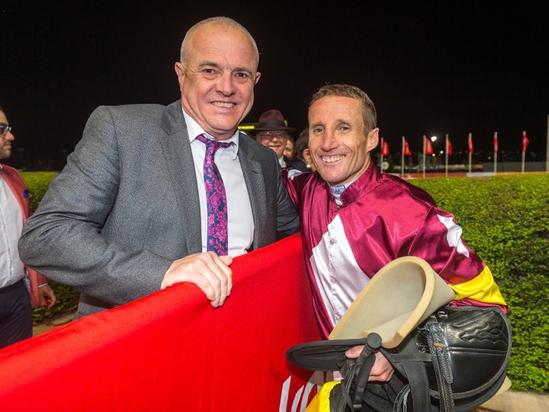 The first of fifteen barrier trials at Rosehill Gardens last Friday (July 19th) generated more hype than any race run in Australia over the weekend.

The Godolphin staff had to pack six blue jackets and six different coloured caps to accommodate a swag of runners, who between them had already contributed more than $15 million dollars to Sheikh Mohammed’s racing coffers.

The six horses in question had won forty one races between them, including an imposing eleven Group 1’s.

It appears the majority of onlookers were focused on the “sea of blue” and how easily the Godolphin horses were travelling down the running.

Lee Curtis and his staff members may have been the only observers who noticed the trial winner Meryl, was going just as easily as they were.

It was a pretty tense morning for the likeable Rosehill trainer who’d been anxiously awaiting Meryl’s return. She was ready to go in January of this year, following a win and two placings at Group 3 level last spring.

The filly was a touch disappointing in two Rosehill trials, and was lame in the near hind after the second one. “Racing’s full of heartbreaking moments and that was one of them”, recalled Lee. 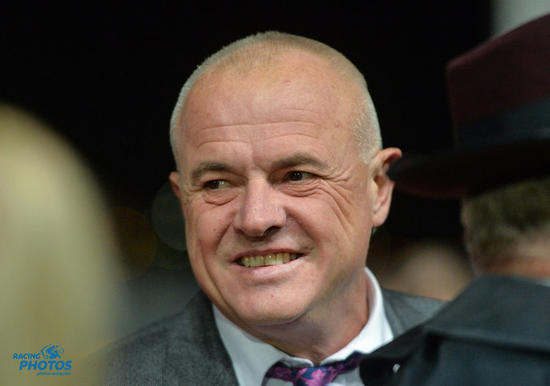 Image courtesy Racing Photos - Lee had something to smile about when Meryl won at Moonee Valley. He wasn't smiling a few months later when she sustained a hock injury.


“A scan revealed inflammation to the proximal suspensory ligament which attaches to the hock. It wasn’t too alarming, but it meant we had to abort plans for the autumn. It hurt at the time because things were quiet in the stable and we were all looking forward to Meryl flying the flag”.

The daughter of Epaulette is raced by an enthusiastic syndicate of nine ladies put together by Christine Cook. Christine and her husband Frank Cook are a widely respected couple in Sydney racing.

Frank is an avid breeder who sends most of his colts to auction, but chooses to race his fillies with friends. His conspicuous maroon, white and yellow silks have become a familiar sight on Australian racetracks. 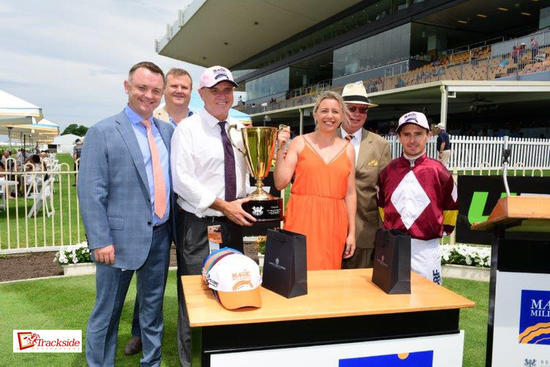 
It’s not surprising that nine girls entrusted with the job of naming a racehorse, would honour the name of one of the world’s most celebrated actresses.

Their much loved filly is out of a mare called Academy Idol. The legendary Meryl Streep, is the holder of a record twenty one Academy Award nominations three of which have brought her the coveted Oscar. She also holds the distinction of having received eight Golden Globe Awards.

The Hollywood icon’s equine namesake has been given every opportunity by her ever patient trainer. The rising four year old has had just nine starts for two wins and three placings. Those wins were at Doomben and Moonee Valley respectively and both at Gr 3 level.

Brenton Avdulla hadn’t been on her back before last week’s trial and was pleasantly surprised. “She’s a push button filly and a pleasure to ride”, said the premiership winning jockey. “She just bounded onto the bridle, travelled sweetly and felt terrific on the line”.

Interesting to note that Avdulla has already locked himself in for Meryl’s second barrier trial and for her resumption in the Show County Quality on August 24th. 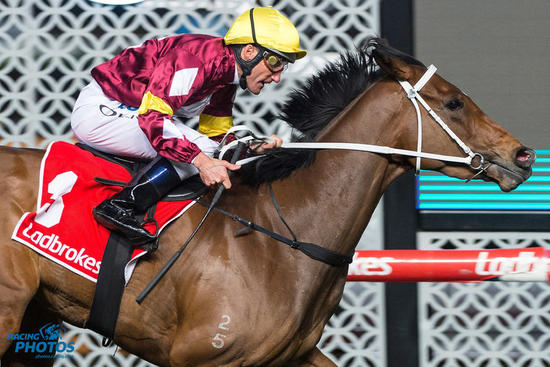 Lee Curtis experienced his all time racing high with another Frank Cook syndicated filly. Lasqueti Spirit was a very different commodity to the uncomplicated Meryl “She was unique and had us tricked for a while”, recalled the trainer. “She had absolutely no turn of foot, but as we learned later could go a strong bat for a long way. I’ll never forget her third placing in the Fernhill Hcp behind Prized Icon and Crown Him. They sprinted past her in the straight, but just past the line she was clearly in front of them again”.

A definite pattern started to emerge with the Beneteau filly. As her trackwork distances were increased, jockeys reported that she didn’t want to pull up at the end of the work. “Most horses are happy to ease down when they feel the rider relax, but this girl would charge on for another 400 metres”, said Lee. “This didn’t happen occasionally. This became a regular thing with her. It was very clear we had a real staying filly on our hands”.

Lasqueti Spirit was having her tenth race start when she lined up in the Gr 1 Crown Oaks of 2016, at odds of $101. Brenton Avdulla must have been taken aback by Lee’s instructions before he was legged up. “I told him to get straight to the front and if he felt he was going too fast at any stage, just go faster”, recalled the trainer 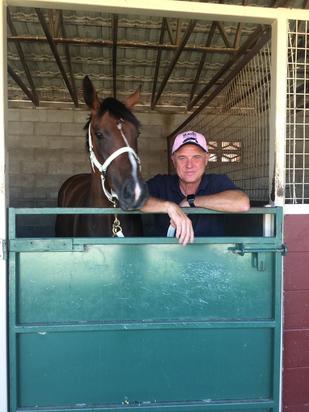 Lee at home with Meryl.

Lee, his wife Cherie who part owned the filly and a very rowdy syndicate were out of control as their despised outsider destroyed the opposition in one of Australia’s most revered classics - her winning margin an emphatic three and three quarter lengths.

It’s almost bizarre to think that Lasqueti Spirit’s Oaks win was her only success in twenty two starts, but her racing style made her very vulnerable when she had to race older horses at the elite level - she ran in seven Group 1’s after her Oaks win. She ran second in a Chipping Norton Stakes and third in the Australian Oaks.

Niggling issues forced this unusual filly into retirement last year with almost a million dollars in the bank. Those who enjoyed the ride with the big, strapping front runner anxiously await the birth of her Pierro foal this spring. 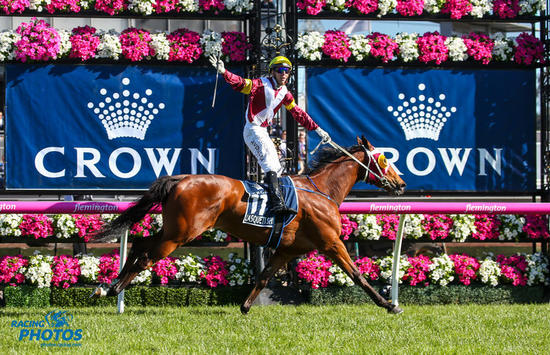 Lee experienced the lowest point of his training career in 2003 when he lost the exciting mare Private Steer. He trained the daughter of Danehill Dancer for just six runs, winning a Kembla Maiden by ten lengths, the Listed Reg Allen Hcp by four lengths and a Randwick 3YO Fillies event by three and a half lengths. She also finished a good third to Royal Purler in the Gr 1 Flight Stakes.

Private Steer finished well back in the 3YO Magic Millions and Lee immediately felt the tremors of uncertainty. “I had a gut feel I was going to lose her, and lose her I did”, recalled the trainer. “At that stage of my career it hurt deeply. It continued to hurt when she won another nine races including a Doncaster, Stradbroke and All Aged stakes amassing $3.4 million in prize money. All you can do is press on”.

The one thing that helped Lee to keep on top of it, was the fact that he’d just come off a wonderful run with the genuine Mistegic. He bred the gelding himself by sending his mare Volcanic Mist to Jack and Bob Ingham’s Gr 1 winning sprinter Strategic.

Mistegic was a precocious two year old who was still racing at the top level at six years of age. “I’ll never forget the look on Brian York’s face when he came out to ride Mistegic in the Breeder’s Plate”, said Lee. “I told him not to worry about barrier fifteen. I said he’ll lead easily and he’ll win. I think Brian thought I had a screw loose but was all smiles after the race”.

The gelding struck his best form in the autumn of 2002. He ran seconds in the Lightning and Oakleigh Plate, was a great third in the Newmarket and then came to Sydney to win the Gr 1 Galaxy with Glen Boss up.

Add to that three Group 2 wins and it’s not surprising he accumulated prize money of almost $1.7 million for owners Frank Coorey and Lee’s first wife Megan. His official record reads thirty two starts for six wins and a whopping fifteen placings - the kind of horse every owner dreams about. 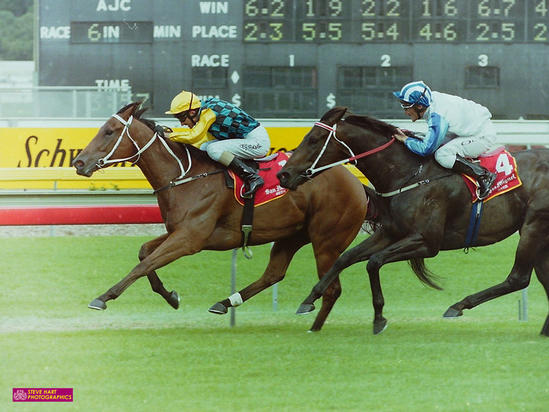 There have been a few other talented horses through the Curtis camp over the years. Prince Of Play, Voltabolta, Press Report, Turbulent Jet and Black Routine won a swag of races between them. “Black Routine was a beautiful black horse from NZ who won three races in town, but had a million problems. We never saw the best of him”, mused the trainer.

I detected a trace of excitement in Lee’s voice when he mentioned Blazing’s name. This lightly raced three year old gelding is another to carry the Frank Cook syndicate colours. Following two Gosford placings, he’s now put together two impressive Hawkesbury wins. “There’s a lot to like about him”, said Lee. “He has the makings of a pretty nice horse”.

The fifty six year old horseman was fascinated by the theatre of racing from an early age. There wasn’t a trace of racing background in his family, but he had no doubt he’d one day forge a career in the industry. He learned the basics from a friend, Nowra trainer Peter Ticye and later formed an association with Canterbury trainer Dave Mills.

Lee spent a lot of time at the Mills establishment over the next couple of years. “Dave was a tremendous help. He was an old style horseman who taught me the finer points”, said Curtis. “It was Dave who suggested I apply for my own licence. He said there was nothing else he could show me and that experience would now be the best teacher”. 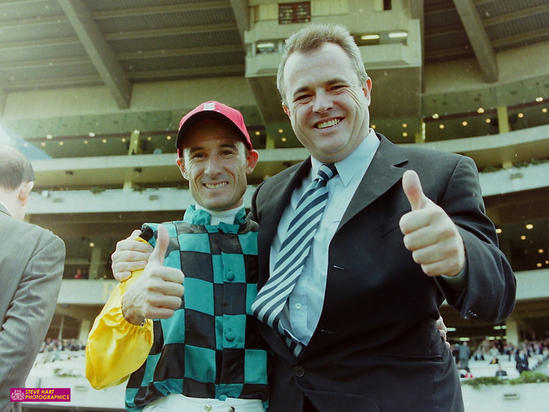 Image courtesy Steve Hart Photographics - Lee and Glen Boss were pretty pleased with themselves after the 2002 Galaxy.

I used to do a weekly segment for Skychannel called “Stable Visit”. We’d select a trainer with a well credentialled Saturday runner and go to his or her stables on the Friday morning.

Lee reminded me over the weekend that a horse called Roadworthy had brought us to his Canterbury base in 1994. He’d been training only a short time but had already posted a few wins with a team of three or four horses.

It was very obvious way back then, that young Lee Curtis was very serious about his aspirations to be a successful horse trainer. There wasn’t a stick out of place and his horses looked immaculate.

Not long after the Sydney Turf Club decided to close Canterbury as a training base. A few trainers decided to call it quits, but the majority, including Lee, relocated to Rosehill.

Twenty five years on Lee Curtis is just as keen, just as passionate about thoroughbreds and the racing game. “Mind you it’s been a tough hard road and I’ve gone close to pulling the pin more than once”, said the likeable trainer.

Nowadays he likes to keep his team to twelve horses. “I have a wonderful understanding with our owners regarding the projected racing careers of their horses”, explained Lee. “We keep the horses which have the ability to compete in town or at the nearby provincial meetings. The others are moved on to places like Darwin, WA and country regions in all states”. 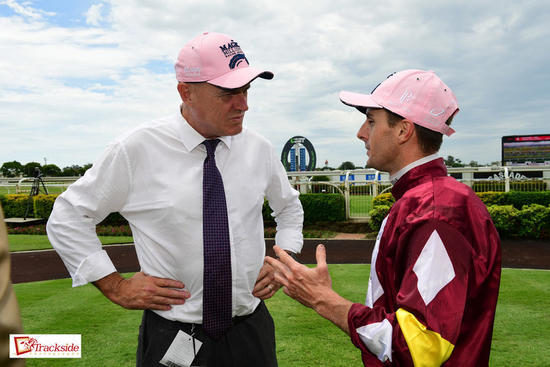 Image courtesy Trackside Photography - Lee had a good chat with Christian Reith after the Bruce McLachlan.

Lee and his first wife Megan had three children together, Brittany (23), Courtney (20) and Larry (15). He and Cherie are the parents of Harvey (7), Jackson (3) and baby Alexis who’s just two months old.

Lee Curtis is as pleasant a bloke as you’ll meet in the ranks of Sydney’s professional trainers. Give him an opportunity and he’ll get the job done as his multiple Group wins testify.

He’s in a tough business in a tough city, but setbacks like the Private Steer episode have hardened his resolve. There’s nothing Lee Curtis isn’t ready for - especially a good horse